Maltese people have historically been very weary at voicing their concerns against their Government. This trait is synonymous with our historical dependency on other countries, and an inherent inferiority complex that does not allow us to reach our full potential. However, the recent spring hunting referendum has proven that we can call for change if we really want it. In the face of the scam that is the (fake) American University of Malta, we owe it to ourselves and others to stand up to the individuals bullying us into accepting this project. 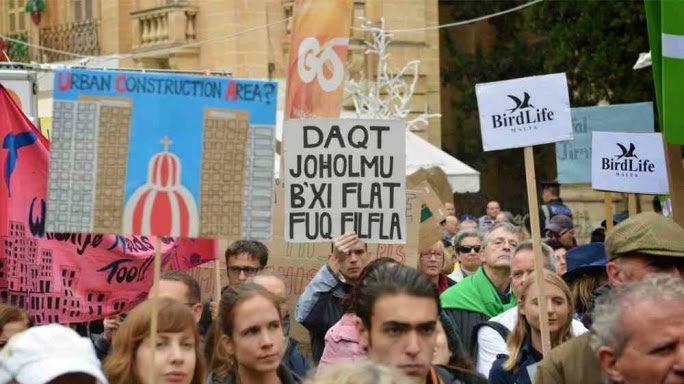 “What is the point of raising concerns when the Government has already signed this deal?” – Most of you will probably be asking this question at the moment. You shouldn’t worry too much about it though, it is a completely natural ideology to have in a country like Malta. Time and time again, we have been taught to take our Government’s words for sacrosanct, as we  cannot possibly have the mental capacity to interfere with the running of a country.

Malta still exists in a perpetual state of Stockholm’s Syndrome. We have become enamoured by our captors, complying with their demands and actions and even lauding and defending them in the process. The Maltese population is increasingly and alarmingly becoming desensitized by the Government’s bullying tactics with respect to our environment. If you think about it, every time we hear of a new irregular development project, or illegal construction issue, or dumping of waste in protected areas, or some grand trojan horse project like the (fake) AUM, we are most likely inclined to say “Here we go again”.

We expect NGOs to do all the dirty work for us, while we sit at home and flick through our news feeds online and wait for others to solve issues that effect us all. Even though NGOs are the closest representatives that the public has in the opposition of projects such as the (fake) AUM, they are also pushed aside in the name of ‘National Interest’ (those pesky tree hugging freaks).

We are led to believe that our voice doesn’t matter in the grand scheme of things, or that we should only speak when asked to (remember that form our Prime Minister wants us to fill in to propose alternative sites for the [fake] AUM?). The vast majority of the Maltese population will unfortunately fall victim to this trap, as they cannot bring themselves to have a rational thought that might contradict that of the Prime Minister.

People tend to forget that the Prime Minister is an imperfect human being just like you and me. If you remove his title as a politician, he is a family man with a tertiary education and with experience in public speaking. I’m pretty sure that the thousands of graduates in Malta are more qualified than the Prime Minister in their respective fields, including the environment. Yet most people still fear voicing their opinion to prevent what they think is potential retribution.

The second people stop idolising politicians in Malta, the country can leap out of its post-colonial idiosyncratic mentality. I am still perplexed at how many times people approach me to say how ‘brave’ and ‘gutsy’ I am for speaking my mind. Everyone has a brain and a mouth, so stop complaining and use them.

Even though the current trending issue is the abusive development of Zonqor Point, such abuse will not stop unless we start shifting our minds closer to those of established European democracies.

I for one do not want this (fake) American University of Malta in my country – I do not want it in Marsascala, or in the south, or anywhere else on the bloody Islands. I want to live in a country where the environment can still be enjoyed outside of designated zones and without fear of further development. And even though many of you will strike me down as one of those individuals who does not want the country to succeed economically, well screw you.