The spring hunting referendum yielded a disappointing Yes win. The Maltese government can keep on allowing illegal spring hunting to continue while the rest of us pay the imposed EU fines so that a select few of people can enjoy their hobby. 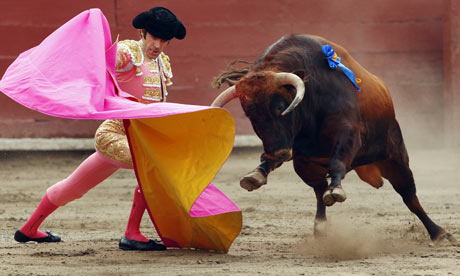 The seemingly traditional and undisputed art/sport of bullfighting has been banned in Catalonia, despite opposition from tradition advocates (Photo credit: theguardian)

Democracy is a double edged sword – it provides a euphoric sense when you win, but a gut-wrenching one when you sit one the losing side. Like most people today, I feel as though democracy has let me down. This feeling is not being aided by those Yes voters who (even though have been too embarrassed to admit their stance) are posting about democracy this, and democracy that. While it is true that the referendum is a democratic process, this is the sixth or seventh one that we had in Malta and every outcome has always been respected.

I for one have been heralding the democratic nature of this referendum. Will I respect the outcome? Of course I will. Do I respect spring hunting? Most certainly not. If anything, this referendum only highlights what I have been saying for so long – that the environment in Malta is irrelevant and insignificant, because our ‘hobbies’ and lifestyle are far more important to us.

At least now we know who the real minority in this country is. Till then, you can all enjoy paying fines out of your taxes for the continuation of illegal spring hunting.

Well, at least for now dear hunters. They did eventually ban bullfighting in Barcelona and the rest of Catalonia (and THAT is an actual traditional and cultural blood sport). Attendance for bullfights in Spain is increasingly becoming a senior citizen’s club. Young people are simply not interested in this bloodsport.

The same situation occurs in Malta, where you have the vast majority of young people opposing spring hunting. But when the young and forward thinking generation is outnumbered by the older and more traditional one, such practices will be extremely difficult to eliminate. And before a handful of young yes voters come out to oppose this statement, you will most definitely be a minority when you reach your golden age. This is what consistently happens in aging European democracies – the older generation screws over the younger one. It recently happened with the Scottish Referendum, and it happened today with the spring hunting referendum in Malta.

So enjoy your illegal spring hunt dear hunters, as your so-called tradition is on the decline and will become obsolete in the next couple of decades. The least you can do now is have the decency to report your fellow poachers. 49% of the population is watching you, and they are not about to let you off that easy.

For now, I will enjoy the last day of Spring before citizens get unceremoniously shoved out of the way and drenched in lead pellets.

N.B. – A special thank you goes out to all those fishermen, firework enthusiasts, bizzilla workers, festa lovers, stamp collectors, for depriving 49% of the population with the opportunity to enjoy spring, when your hobbies are safeguarded under Maltese Law. Thank you for being selfish and short-sighted.