With the deadline for the completion of the 2015 Malta gas fired power station etching closer, experts continue weighing in on the infeasibility of this project. Of great concern amongst the scientific, environmental and infrastructural community is the government’s decision to place the gas supply next to the actual power station. If history tells us anything, can we really trust a politician’s word as opposed to the technocrats when it comes to public safety?

Artist’s impression of where the gas supply will be store on a ship, permanently moored next to the Delimara power station (Photo credit: TimesofMalta)

The latest statement issued by the energy minister Konrad Mizzi insists that “Storing gas on ship in Marsaxlokk will be safe”. Even though Maltese people cannot seem to set aside their political preferences on any issue, there are many, many worrying things that come across from Konrad Mizzi’s interview in the above link.

As any graduate from any discipline can possibly understand, one needs to conduct preliminary studies or a detailed ‘literature review’ to start a project, assignment or dissertation for example. Yet, in this interview all that is being said is how “studies are still underway”, “studies will be conducted” or “Process is still ongoing – in reference to the risk assessments”. How can anyone determine what the outcome will be (in this case where the gas supply will be placed), unless proper study is conducted? Such a modus operandi completely contradicts even the most basic form of project management.

My personal worry is that the minister has already initiated a form of “assurance campaign”, where he is publicly declaring the safety of this venture and advising people to not worry. While many people will most probably believe or reject this simply based on their political colours, such a statement took me back to my studies on how environmental issues are conveyed in the media by politicians. It made me recall one of the most prominent environmental stories of our time – the BSE (Mad Cow disease) case in Great Britain.

The ‘Mad’ approach by the British government to BSE

In December 1984, cow number 133 fell ill at Pitsham Farm, near Midhurst, West Sussex, showing very strange symptoms and an erratic behaviour. It died the following year and scientists discovered peculiar lesions in its brain, a finding which would become all too familiar in following years. While technocrats were raising concerns, the Ministry of Agriculture ignored the warning signs for around two years, until it acknowledged the disease in 1986 following numerous cases across the country.

The British government stalled decisions on this issue for years, launching a public assurance campaign stating how British beef was scientifically tested and safe to eat. The propaganda reached it height in 1990 when then agriculture minister John Gummer famously feeding his four-year old daughter Cordelia a hamburger to personally guarantee the beef’s safety during the mad cow outbreak. Interestingly, it was later claimed that the photographs were staged and that the burger had actually been bitten into by a civil servant. Beef Eater: John Gummer and his daughter eating a hamburger as part of a public campaign to assure British beef is safe (Photo credit: Hedin“>dailymail.co.uk)

Needless to say, the BSE case is recognized as the worst animal epidemic and public health scare in British history, claiming almost 180,000 cattle in the UK alone with another 4.4 million being destroyed as a precaution. This cost the taxpayer more than £5 billion, all because the government failed to listen to what experts were saying. Furthermore, the disease claimed around 200 people worldwide, and left a long lasting impact on people who lived in the UK between 1980 and 1996  as they cannot give blood since this carries the risk of transmitting the human form of mad cow disease.

Should Malta brace itself?

If you managed to arrive thus far into this post, it will be easy for you to see the similarities between John Gummer and Konrad Mizzi. Even worse for Malta, rudimentary aspects of this project are being green lit without even bothering to complete the necessary preliminary work!

The only thing that can possibly come out of such a rushed approach to building this power station is a possible disaster that like the mad cow disease case will cost people their lives and the taxpayers millions. This is the time for the public to put politics aside and acknowledge the need for caution in such projects and demand a more responsible approach.

It is also time for the government and Konrad Mizzi to acknowledge the Social Impact Assessment results and heed the concerns of residents in the vicinity of this project.

What if there was an incident?

If such an incident where to happen, what would be the possible effects for the Maltese people? Well, we do not need to look too far away from our shores to find the answer. On the 11th July 2011, an explosion occurred at the Evangelos Florakis Naval Base in Cyprus, a direct result of an incompetent government’s decision to store 98 containers of explosive next to the island’s largest power station in Zygi; a highly explosive substance next to a power station – sound familiar? 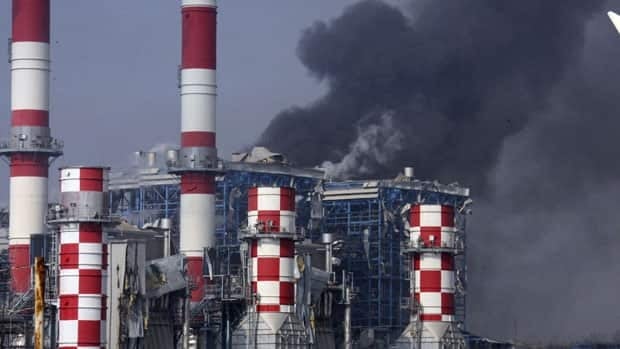 Cyprus’ largest power station (Vasiliko power station), estimated to supply power to half of the island, was severely damaged as a result of an explosion which could have been avoided (Photo credit: CBCNews)

This resulted in 12 casualties and scores injured in the immediate vicinity, and complete blackout across half of Cyprus (remember that Cyprus is 29 times large in size than Malta, so an explosive in the latter would wipe out the entire energy grid). The immediate aftermath included a cost of €2 billion for the repair of what was left of the power station, and sanctioned electricity from neighbouring Northern Cyprus at an unpublished cost.

Following the explosion, Moody’s rating agency downgrading Cyprus’ rating from A2 to Baa1 with a negative outlook  since such an event has considerable “fiscal and economic consequences” when it occurs in such a small economy. This led to the start of Cyprus’ financial woes, leading up to the 2013 bailout by the European Union.

It does not that a genius to figure out where Malta is heading with this new gas fired power station, all thanks to political naivety and ignorance in the face of experts and chilling tales from our neighbours. How many cow number 133s and power station explosions in other EU member states need to happen for the Maltese government to get a clue?

Maltese MEP Roberta Metsola has launched an online petition to the European Parliament against the floating gas storage discussed above, in order for it to look into the risk to public safety should this project go ahead.

Prevention is better than cure, so I urge people to follow the link below and sign this petition: